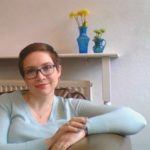 I'm stepping back a bit after the end of May (research is very busy!) but I'll still check the site if you have any questions for me :)